Published by admin On October 10, 2022 Leave a response 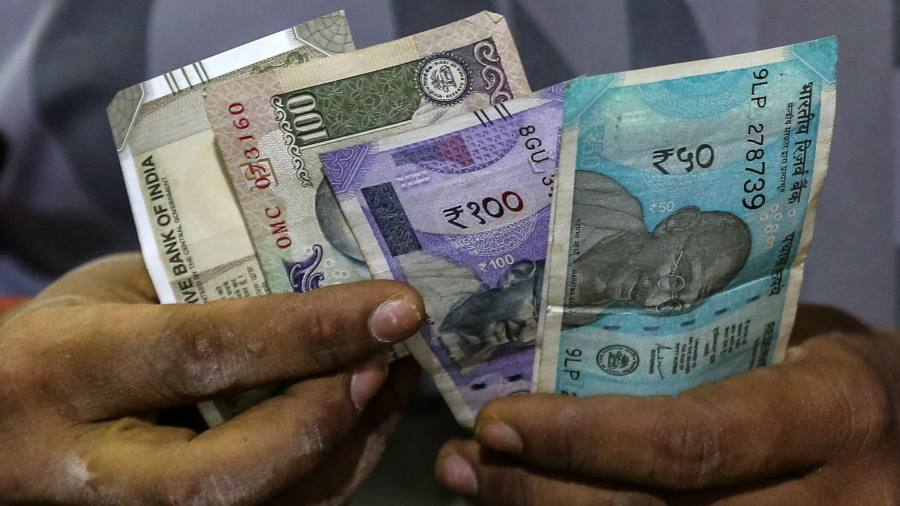 India’s foreign exchange reserves have dwindled by nearly $100bn this year as its central bank defends the rupee against a surging dollar amid intensifying market turmoil around the world.

But Financial Times analysis suggests India’s monetary tightening and foreign exchange market interventions in defence of the rupee have helped prevent much larger depreciation of the kind suffered by most other leading Asia-Pacific currencies this year.

As pressure from the surging dollar has depleted reserves and driven India’s south Asian neighbours Sri Lanka and Pakistan into financial distress, India’s reserves of more than $500bn remain adequate, according to analysts and the Reserve Bank of India.

Shaktikanta Das, RBI governor, said last week that the global economy was in the “eye of a new storm” as he announced the central bank’s fourth rate rise this year, increasing the policy repo rate 50 basis points to 5.9 per cent.

“Almost in all parameters, our vulnerability is far less than most of the emerging market economies,” Das said at a press briefing after the rates meeting on Friday.

India’s foreign exchange pile shrank by about $96bn to less than $550bn in US dollar terms between the start of 2022 and late September, owing to asset revaluation resulting from global financial market volatility and depletion from the central bank’s currency market interventions. 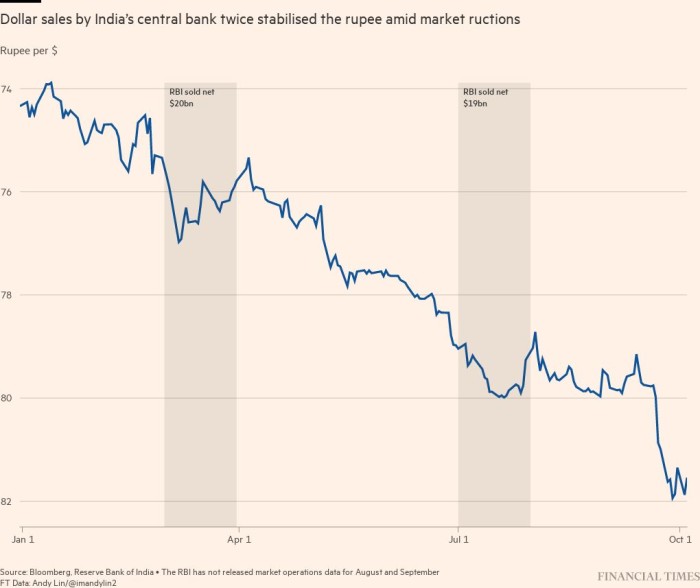 Das said on Friday that about 67 per cent of the decline in reserves during the fiscal year from April was owing to falls in the relative value of non-dollar assets and US bonds.

The rupee fell last week to a record low of nearly Rs82 to the dollar after pushing below 80 — a threshold some analysts believed the RBI was defending.

Despite the sharp fall, many market participants were confident that the RBI would continue to intervene to limit depreciation of the currency of Asia’s third-largest economy.

The RBI has insisted that it has no fixed exchange rate target and that it intervenes to curb excessive volatility and anchor market expectations. 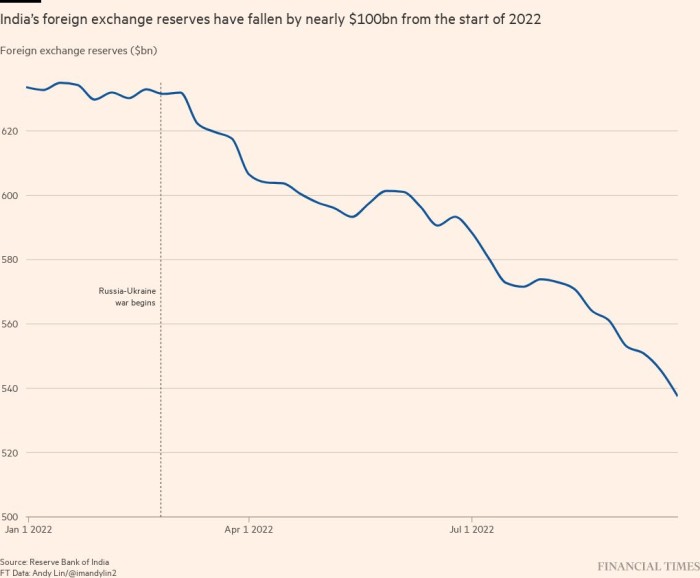 “India’s decline in reserves in aggregate terms has been fairly large,” said Jeremy Zook, director of Asia sovereign ratings at Fitch Ratings. “This isn’t unique to it, though, in the current situation,” he said, noting that other Asian countries’ reserve levels were falling, too.

Fitch said in a research note last month that the use of reserves by central banks with comfortable reserve positions, including the RBI, to defend their currencies from volatility would not affect their creditworthiness. However, the agency said, a “sustained” regional decline in Asian countries’ reserves could eventually put “downward pressure on ratings”.

The RBI’s intervention in the currency market appears to have been most intense in March, the first month after Russia’s invasion of Ukraine. India sold a net $20bn that month to support the rupee, as the war fuelled a rise in commodity prices. India, one of the world’s largest energy importers, also began buying discounted oil from Russia. 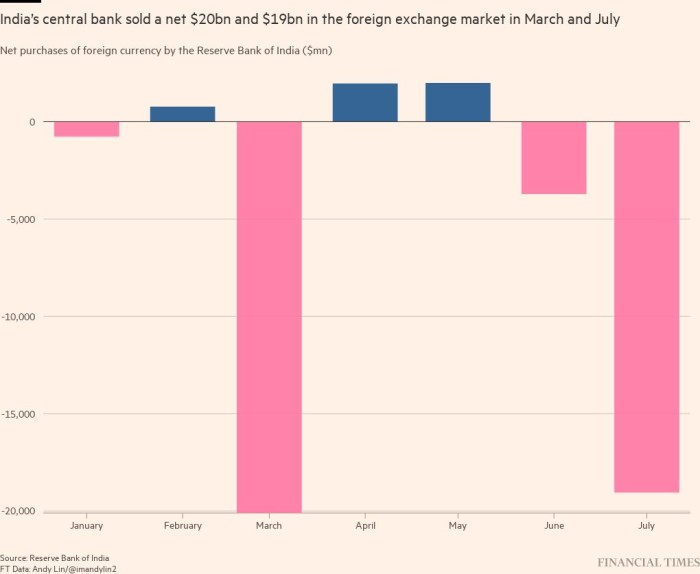 India sold a further net $19bn in July, the most recent month for which data are available, when the US Federal Reserve raised rates and signalled further increases to come, piling the pressure on emerging market currencies.

The RBI’s intervention has helped the rupee outperform most other Asian currencies this year, falling less than 10 per cent against the US dollar, compared with declines of more than 15 per cent for the Korean won and Japanese yen. The Bank of Korea raised its base rate to 2.5 per cent in August, while Japan is the only country in the world to retain negative rates.

“Given the circumstances, and despite the very aggressive tightening by the RBI, the rupee should have depreciated more,” said Priyanka Kishore, head of India and south-east Asia at Oxford Economics. “But the bank’s foreign exchange intervention had kept it quite stable until recently.” 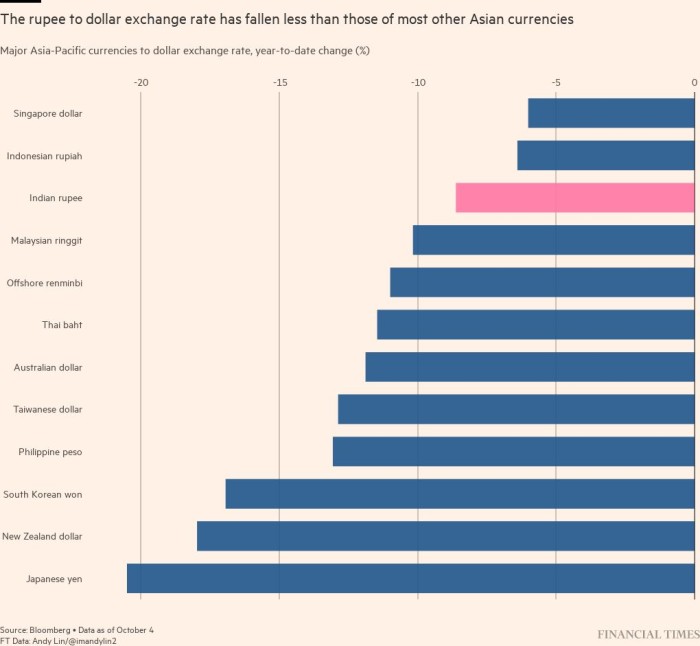 Analysts said India’s limited capital controls might have helped reduce the volatility of trade in the rupee, but the RBI’s selling of reserves and the economy’s relatively strong growth prospects had played a larger role in easing pressure on the currency.

While further market turmoil could still be a threat, India’s ample forex reserves have in recent years been a source of economic strength and remained so, they said.

Kishore said India’s reserves were still sufficient to cover a “more than adequate” eight months of imports. “They are not in uncomfortable territory yet in regards to their external buffers,” she said.