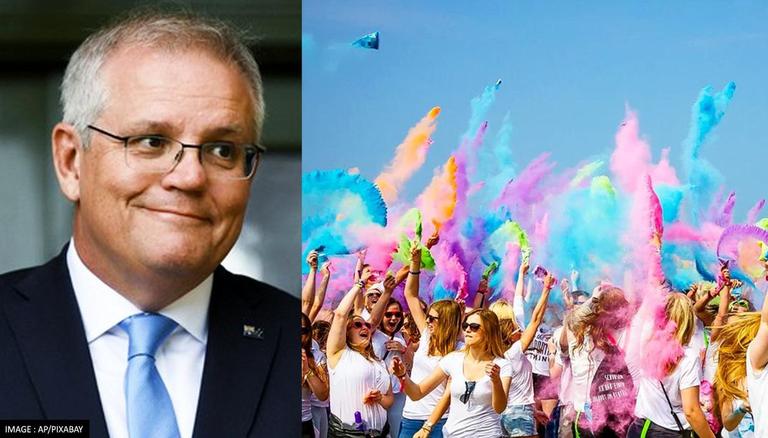 On Friday, Australian Prime Minister Scott Morrison extended Holi greetings to the Indian-Australian community. In his greeting message released on the festival day of Holi, PM Morrison said, “Namaste to all my Indian Australian friends celebrating the Festival of Colours.”

“Holi holds even more meaning this year. As we reach the end of a 2nd pandemic yr, we can be thankful for the many things that have sustained us -our family, community & faith,” his message reads pic.twitter.com/EWNzhGnZfX

“We are the most successful multicultural and multi-faith nation on Earth– a beacon that shows what it means to be a liberal, free and democratic people, ” Prime Minister Scott Morrison said.

Speaking about the festival of Holi in his written message, Morrison said that Holi is one of the most important as well as vibrant events for Indian-Australians as it gathers people for a cheerful celebration.

In his greeting message to the Indian-Australian community, Prime Minister Scott Morrison said that the Holi festival this year holds more meaning. The Prime Minister said that with the second year of COVID pandemic coming to an end, “We can be thankful for the many things that have sustained us.”

“Holi holds evermore meaning this year. As we reach the end of the second pandemic year, we can be thankful for many things that have sustained us — our family, our community, and our faith,” Prime Minister Morrison said in his message.

The Australian PM also thanked the Indian-Australian community for the love and care they have shown to all Australians. “Now after being apart for so long, these celebration brings us together in a spirit of unity and friendship, and inspiring hope for the future,” PM Morrison further added. He ended his message saying, “Holi Ki Shubh Kaamnayen!”

As India celebrates the festival of colours, President Ram Nath Kovind, Prime Minister Narendra Modi, and other political leaders extended wishes to the nation on the occasion of Holi on Friday.

President Kovind greeted the nation on the festival day of Holi and said, “Hearty congratulations and best wishes to all the countrymen on the auspicious occasion of Holi. Holi, the festival of colours, is a living example of communal harmony and reconciliation. It brings good news of the arrival of spring. I wish that this festival infuses joy, enthusiasm, and new energy into the lives of all the countrymen.”

PM Narendra Modi took to his Twitter and greeted everyone. “Wishing you all a very Happy Holi. May this festival of colors, a symbol of mutual love, affection, and brotherhood, bring every color of happiness in your life,” PM Modi tweeted.